On the occasion of Mahaa-Shivaraatri, we present to you the Shiva-Stuti – a prayer to Lord Shiva. Mahaa-Shivaraatri, according to the Hindu Shaaliwaahana (शलिवाहन) calendar, occurs on the 13/14th day of the dark-half of the Maagha  (माघ) month. This year, it is on the 2nd of March 2011.

Lord Shiva, as described by the Puraana  (पुराण) scriptures, is

Rudra (रुद्र) is a Vedic deity, considered to be fierce & benevolent, harsh & kind, disease giver & disease curer, all at the same time. Shiva (शिव), the Pauranic deity also possesses similar characteristics and the word ‘Shiva’ meaning ‘auspicious’ has also been used to describe Rudra in the Vedas themselves. Hence, Rudra & Shiva are linked with each other and considered, most of the times, to be one and the same.

According to scholars, the cosmic dance of Shiva, called Ananda Tandava (आनंद तांडव  meaning,‘the Dance of Bliss’) symbolizes the cosmic cycles of creation and destruction,as well as the daily rhythm of birth and death. The dance is a pictorial allegory of the five principle manifestations of eternal energy – creation, preservation, destruction, illusion and salvation.

It is said that the performance of Ananda-Tandava led to the creation of the universe, and is the reason to celebrate Mahaa Shivaraatri

There are several ways of celebrating Mahaa Shivaraatri and rituals vary from region to region, however, the following rituals are a part of festivities all over:

Following verse is written in the Mandaaramaalaa  (मंदारमाला)meter.
Here, the poet describes the compassionate form of Lord Shiva along with Goddess Parwati (Bhawani) and prays that the Lord always stay in the hearts of his true devotees. Although this verse is usually sung before an Aarti (probably because it begins with the word ‘Karpuura’), it is a prayer for Lord Shiva.

Shiva has been described as a very handsome and fair God and only his throat turned blue as he drank poison and contained it in that area. Another name for Shiva is Neela-Kantha

नीलकंठ (the one with a Blue Throat).

I bow down to Lord Shiva who is fair like the camphor, wears a garland of king of serpents, is an incarnate form of compassion, an essence of all material being, who always resides in the lotus-like heart (of his devotee) and who is accompanied by GoddessBhawani. 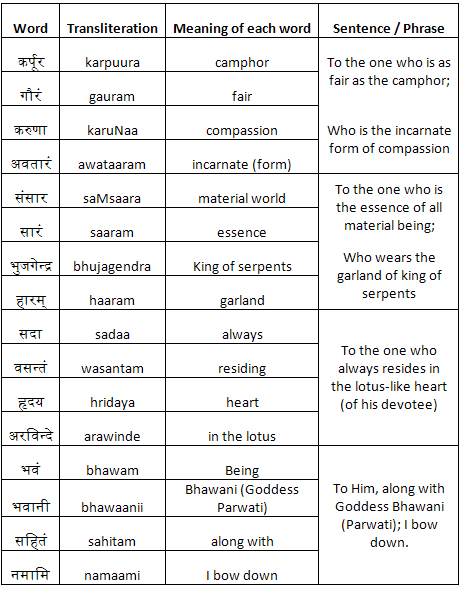